Another Betting School article. This time one I originally wrote in January 2010. It talks about the coming months in the season so should still be a good read and valuable.

We are now in the new year and the fresh start gives us a chance to look ahead to the rest of the season. Most leagues they have passed the half way point in terms of matches but there is still plenty to come and lots to be decided. In January and February teams are still jostling for position and trying to move up the table but as the season nears the finish some games mean a lot and other games are meaningless.

The data I use comes from www.football-data.co.uk and spans 5 seasons from 05-06 to 09-10 for the top leagues in Germany, England, France, Italy and Spain.

When looking at data over time charts come into their own and there is no better way to see patterns. The first areas to look at are goals scored and then shots taken as they go together. 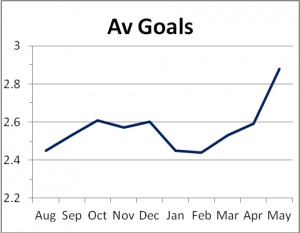 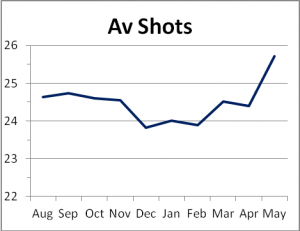 Looking at the above you can see some similarities and obvious patterns. At the start of the season the goals are pretty low. However, the number of shots is not lower and so it may be that players take a while to get into the groove and so the early season dip in goals is to do with a bit of rustiness. Then come the months of January and February where there is a clear drop in both the number of goals and number of shots. I can think of no explanation for the drop in shots unless poor pitches and cold weather plays a part. The final part of the season sees a clear increase in both shots and goals possibly down to a lot of teams having little to play for. This brings a more carefree attitude and teams may concede and score more goals as there is less pressure.

As we can see a pattern here the best market to exploit it might be the over under 2.5 market. If we look at percentage of matches under 2.5 goals we hope to see the same pattern again. The big question is do the bookmakers also know that this pattern exists? By charting the average price of under 2.5 goals we should be able to see just that. 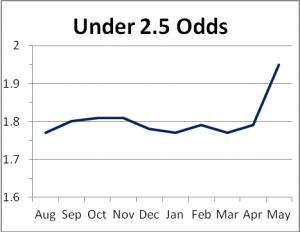 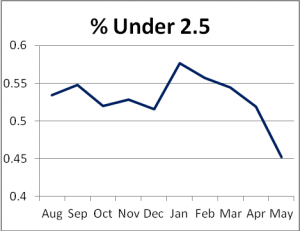 Although the under 2.5 graph is reversed you can see the same pattern exists in January and February with those 2 months having the highest averages of the season. If we look at the odds for the bookmakers (I have used BbAv<2.5 = Betbrain average under 2.5 goals) we can see a minor drop but nothing like we have seen in any of the other charts. The bookmakers have the climb at the end of the season spot on but there could be a bit of profit to be taken in the months of January and February.

The reason I chose the under market is that it is more profitable than the overs market.  You can see this in the following table as well as a complete breakdown by month for over and under 2.5 results. Again this uses the Betbrain average over and under 2.5 goals price from football-data.co.uk.

What stands out to me here immediately is that backing all games under 2.5 in January returned a profit and doing the same in February just returns a very small loss. If we had used the maximum odds then those two months combined return an 80pt profit and a ROI of 4.5%.

The other point is that even though the bookies expect more goals in May you can still do well backing overs. Looking at the maximum odds a profit is attainable for this month backing every game as over 2.5 goals.

I think it’s worth digging a little deeper into the January and February under 2.5 results to see if we can find more profitable angles. Maybe some leagues may be better than others so that is a starting point.

Very interesting that the Premier League is the only league to show a profit for both months. Serie A and the Bundesliga are the only two leagues not showing a profit in January and that does look a better month to concentrate on. In February, aside from England, Italy is the only country that shows a profit. If we stick with the Premier League in January we’ll see if it’s possible to improve the figures using a rule. If we exclude any match featuring one of the big 3 of Arsenal, Chelsea and Manchester United we get these results

Normally I would include Liverpool in the big 4 but with their current situation and the poor time they had last season I thought it sensible to stick with a consistent 3 and they make little difference to the results either way. So a simple system of backing under 2.5 goals for Premier League matches in January when one of the big 3 is not playing returns a very nice profit.

It makes sense to look at some other statistics now and see if patterns exist. There is data for corners and cards but sadly no data for the odds so we cannot search for profitable angles but merely speculate.

January again features as the lowest month along with October. I am not sure whay October appears but the drop in January would fit with what we found earlier with less shots. I would assume less shots would contribute to a lower corner count. With corners not being a totally mainstream market there could well be opportunities going lower in January. As in all the charts we see the peak towards the end of the season.

The last area to look at is cards. 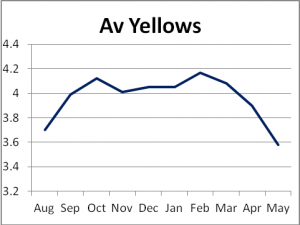 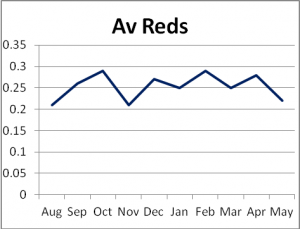 With the yellow cards there is a clear pattern at the start and end of the season of less cards but from October to March it all looks pretty steady. Refs probably start the season trying to be more lenient or maybe firmer pitches then and at the end of the season play a part. Again I would imagine the bookies may be aware of the lower card counts at the end of the season but the drop is quite considerable and they may not judge it correctly. In terms of red cards there is a drop in November which seems a bit out of character and if we ignore that then the red cards would show a similar pattern to the yellows.

Overall it looks like there are a few distinct sections to a season and we are in the midst of one now in January and February to come. The league may not be decided in these months but the games are very important as everyone still has something to play for. We can expect less goals and less corners it seems as well. Then when we get to May we should see more patterns emerging like more shots, more goals, more corners and less cards.  Further research may be needed to see how the end of season stats are affected by teams playing for nothing or those at the top and bottom of the table.