What a start it’s been for Manchester City, who are currently sitting 8 points ahead of 2nd place Manchester United, despite being only 11 games in. They’ve won 10 of those matches, the only standout being a draw with Everton.

City have already been smashing records, for example,  their 13 game winning streak in all competitions (a new club best). In addition, they’ve also beaten their previous mark with 6 consecutive away wins. Their goal difference of +31 is a Premier League record through 11 games, and they also have a perfect Champions League resume to add to the list.

However, at some point the question has to be asked: Can City break the ultimate record – most points in a Premier League season. The current record is held by Chelsea, who notched 95 points in 2004-05 under Jose Mourinho.

A simple look at this says that if they have 31 points through 11 games, they’ll end with 107 points. That’s a pure linear model. However, the sporting world does not work that way. We have to take into account the idea that Manchester City will likely regress back slightly as the season wears on.

We can model this through the use of our “Pythagorean Theorem” (https://goo.gl/cUiccT). This model takes a team’s goals scored and goals allowed, and uses them to create an expected points per game for that team.

Given Manchester City’s current statistics (which of course will change over the course of the year), they have an expected 2.52 points per game. And with the 27 remaining games in the season, they are projected to obtain another 68 points, which would result in an expected 99 total points at the end of the season. 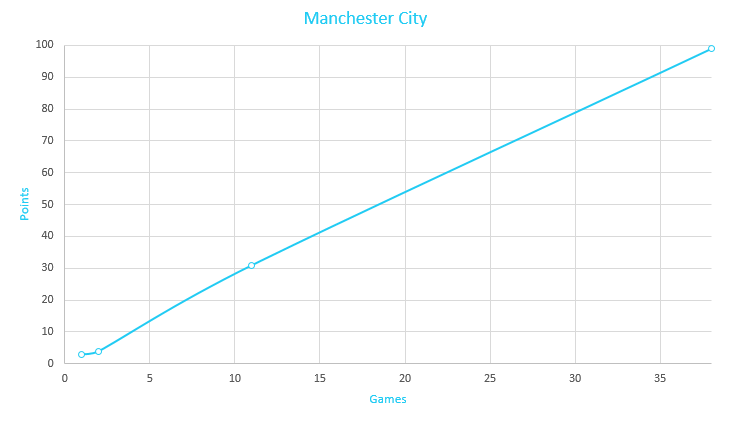 Now, we can’t take transfers, injuries, and other unforeseeable events into account, so this is solely based on how they’ve begun their campaign. And so, while nothing is guaranteed, it is likely that we will see Manchester City’s 2017-18 campaign end in a Premier League record. It will be really interesting to see whether the Citizens will achieve this feat, and maybe even go on to reach triple digits.