We have reached the halfway point of the season and it already has a feel, and probably is, a one-horse race to the title. For a league that has over the years gained areputation of being fiercely contested, often the race for the title boiling right down up to the final whistle, this reinforces the dominance of the team leading the premier league, Manchester City.

They say numbers don’t lie, and going along with this saying, it’s conclusive to say Manchester City are destined for the English Premier League title. Currently, Manchester City are sitting on 55 points having won all but one of their 19 games. They only dropped 2 points, during the first weeks of the season surprisingly, to a struggling Everton side. They have scored a record 60 goals in 19 games conceding mere 12 goals thanks in part to the brilliant form of new arrival, Ederson.

The impressive form of Manchester City is not limited to the Premier League, they have been doing the job nicely in other competitions too i.e. the Champions League and the Carabao Cup (formerly the League Cup) while in January they won their first game in the FA Cup as the journey to Wembley started. Pundits have already started to compare this Manchester City squad to other great Premier League squads of the past. The comparison, however, leads to one question, which is how many trophies this squad will win because it’s the number of trophies a team wins that determines if it is a great or just a good team. 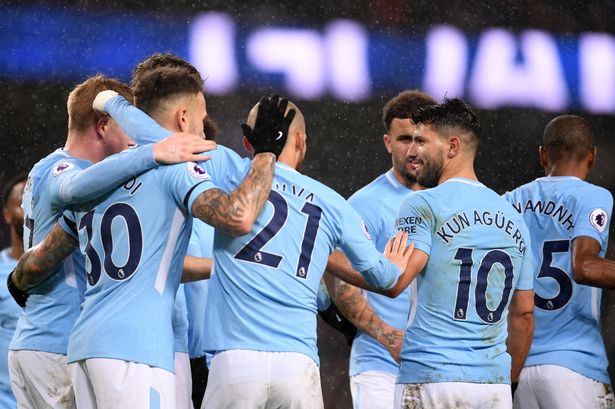 Let us assess the chances of Manchester City winning the quadruple this season.

Leading the second-placed team by 14 points at the midway point of the season, it seems reasonable to say the title is Manchester City’s to lose. A brief look at the history of the Premier League since its inception in 1992 shows that 2 out of every three teams that have been on top of the league on Christmas day have gone on to lift the title, and that includes teams leading by a couple or even a single point. Considering these statistics, the premier league is there for City’s taking.

Another factor to take into consideration is the strength-in-depth of the Manchester City team. At the start of the season after Benjamin Mendy suffered a season-long injury, many raised concerns that City would suffer as a result as they did not have another natural left back, however, those fears were quashed as midfielder Fabian Delph seamlessly fitted straight into the role.

Crucially in Pep Guardiola they have a manager whose DNA is winning.

In their six matches in the Champions League, Manchester City won all but one. They lost their final match against Shakhtar Donetsk which was a dead rubber as they had already topped the group. For topping the group, Manchester City received a favourable draw, as they will play against the Swiss champions, FC Basel.

Manchester City are favourites to progress but they should be waryof the Swiss champions who are playing some good football in their domestic league sitting just two points off the top.

However, the chances of reaching the final are increasing all the time for Manchester City as Real Madrid and PSG play each other so one of the big teams will fall by the wayside. At the current level of Manchester City you would give them a good chance against the biggest teams in Europe.

The biggest cup in England started in January. For Manchester City, the chance of winning the FA Cup is very high and they already came from behind to beat Burnley convincingly. As the competition progresses, there are higher chances of them meeting the top teams. However, unlike other teams they can afford to play their strongest team in the competition as they have a nice gap in the league.

Already in the semi-finals against Championship team, Bristol City, it’s looking likely that they will be in the final. Bristol City shocked Manchester United in the quarterfinals but a repeat against another Manchester giant looks very unlikely. If they reach the final, they face either Chelsea or Arsenal and against either team, Manchester City will fancy their chances of winning.