Any Spanish football match is followed by both managers and their press conferences. Often they are pretty boring affairs and they drive my son mad when he watches the round ups on a Sunday morning and has to sit through someone answering the same questions again and again. Ancelotti’s press conference after Bale’s debut was a complete waste of time as he sticks to basic Spanish and said nothing of even the slightest interest.

One of the press conferences that we ended up sitting through was that of Unai Emery and I liked the way he talked about the game and what he said. His rounded it off by saying it was a negative result but there were positives to take from it. I like Emery and thought he did well at Valencia and I also have read a bit about him on the internet. He has done very well in his managerial career and this season will be very interesting.

The information in this article is mainly taken from wikipedia and I am not claiming to be an Emery expert. Emery is just 41 and he got his first job at Lorca at the age of 32.  Lorca no longer exists as a club but he took over in November 2004 and at the end of the season the team went up from Segunda B to Segunda. In Segunda the team finished in 5th place, just missing out on promotion to Primera, finishing in 5th place.

Emery left at the end of the season and joined Almeria, who had finished one place below Lorca in 6th. Lorca went on to have a nightmare season being relegated and starting their slide to extinction. Almeria however, finished in 2nd place and were promoted to Primera.  So in Emery’s first 3 seasons he was promoted with Lorca, then nearly led them up to Primera and finally switched teams and won another promotion. Emery stayed with Almeria and they finished in 8th place in Primera in 2007/08.

In a similar fashion to when he left Lorca for a team that finished below them Valencia finished 2 places below Almeria and signed up Emery as their new manager. Koeman had been the manager of Valencia and the season had been a disaster ending it in 10th place. Emery was in charge of Valencia from May 2008 to May 2012 and in that time they finished 6th, 3rd, 3rd and 3rd.  After the third consecutive 3rd place finish he decided to leave. Was Emery bored of finishing 3rd and not being able to break the domination of Real Madrid and Barcelona in Spain?

During the time Emery was in Valencia they were in dire financial trouble. Using the transfermarkt web site Valencia made a profit on their transfers in 3 of the 4 seasons Emery was in charge of £4m, £14m, £50m and then finally in his last season they made a loss of  just £1m. Players like Villa, Silva and Mata were sold but Valencia maintained their good form and a profit of £68m on transfers.

He had a short spell in Russia after leaving Valencia which did not go that well. He only lasted 6 months before being sacked but still won more matches than he lost. Russia is a completely different culture and having lived in both of the countries I can easily see why people might fail in Russia. Someone like Emery’s success must also be based on relationships with players and getting them to over perform and I would imagine the language barrier inhibits that greatly.

Emery finds himself at Sevilla now after taking over in January. In the close season he has seen Sevilla sell Navas, Negredo, Medel and Kongdogbia making a net profit of £50m on the transfers. He’s made a lot of signings and some of them look pretty interesting.  He has Marko Marin on loan from Chelsea and picked up Kevin Gameiro from PSG for £6.5m. 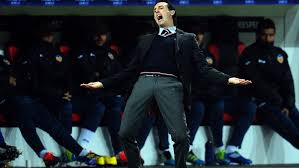 Sevilla find themselves with just 2 points from 4 games and 2nd from bottom but as the team in 7th has just 5 points this means very little, especially as they have played 2 of the best 3 teams in the league (Barcelona and Atletico) and also had a tough match against Malaga. The year that he took Almeria to Primera they lost their first 3 matches.

My hope is that the bookmakers underestimate Sevilla. They play Valencia next weekend and I think this is a game that will tell us a lot. Valencia are the clear favourites for the 4th place spot and I am not quite sure why. Djukic has taken over at Valencia and he had a nightmare end to last season with Valladolid. They finished in 14th place and won just 3 of their last 18 games. His managerial record does not look that special and I would not be surprised to see Sevilla finish about them. 11/1 on Sevilla to finish in the top 4 is far more appealing than a tight 3/1 on Valencia.

Continuing managerial success is very tough and if Emery does so this season he deserves to be given one of the big jobs in club football.